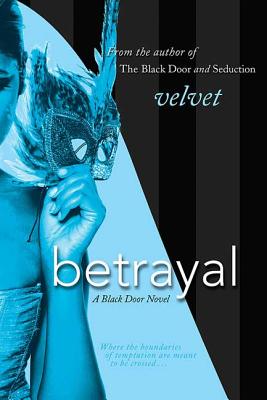 This is book number 3 in the Black Door Series series.

Set against the backdrop of the political Washington scene, infused with the glitz of New York City, Betrayal is the sizzling third book in Velvet's Black Door series, returning to characters introduced in the first book.

Ariel and Preston are happily married, but for how long? Once his memory returns, he considers turning to his wife's nemesis, Michele, for comfort. But will he forgive and forget?

Trey and Ariel have buried their feelings for each other, and put the past behind, but their secret pact to keep the truth from Preston reunites them in a newly minted friendship. Will they be tempted to cross the line again?

As with the previous Black Door novels, Betrayal is sexy and sophisticated – erotica served straight-up with a twist!

VELVET is the name of one of the steamiest writers of erotica. Velvet has her finger on the pulse and knows how to make your heart race with her tantalizing stories of lust and seduction mixed with a dose of suspense. As the creator of The Black Door series, Velvet uses the world as her muse, traveling the globe for inspiration.

“Velvet crosses many lines other authors avoid, and pulls the reader into each experience, scheme, sexual exploit and mystery of the characters. There are many doors left unopened at The Black Door, and readers will anticipate the release of the next installment.” —Fallen Angels on Seduction

“A great read. If you enjoy reading erotica, "Seduction" by Velvet is a book that will keep you wanting more.” —The Latest Reviews.com on Seduction

“From the first page to the last, THE BLACK DOOR is so visual that it reads like a movie!” —Taraji P. Henson, Actress (Hustle and Flow)