Beyond Band of Brothers: The War Memoirs of Major Dick Winters (Paperback) 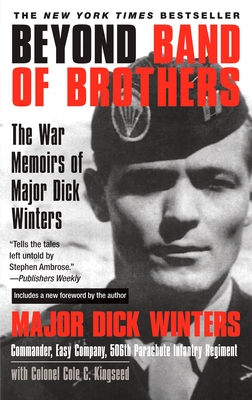 “Tells the tales left untold by Stephen Ambrose, whose Band of Brothers was the inspiration for the HBO miniseries...laced with Winters’s soldierly exaltations of pride in his comrades’ bravery.”—Publishers Weekly

They were called Easy Company—but their mission was never easy. Immortalized as the Band of Brothers, they suffered 150% casualties while liberating Europe—an unparalleled record of bravery under fire. Winner of the Distinguished Service Cross, Dick Winters was their legendary commander. This is his story—told in his own words for the first time.

On D-Day, Winters assumed leadership of the Band of Brothers when its commander was killed and led them through the Battle of the Bulge and into Germany—by which time each member had been wounded. Based on Winters’s wartime diary, Beyond Band of Brothers also includes his comrades’ untold stories. Virtually none of this material appeared in Stephen Ambrose’s Band of Brothers. Neither a protest against nor a glamorization of war, this is a moving memoir by the man who earned the love and respect of the men of Easy Company—and who is a hero to new generations worldwide.

Major Dick Winters was born near Lancaster, Pennsylvania in 1918. One of the initial officers assigned to Easy Company of the 101st Airborne, Winters jumped into France on D-Day and commanded the unit now known as the Band of Brothers. He led his men through the Battle of the Bulge and captured Berchtesgaden, Hitler's Bavarian retreat. Released from military service in November 1945, he returned briefly to active duty during the Korean War, then spent his life on a small Pennsylvania farm and was a highly successful businessman. He passed away in 2011.

Cole C. Kingseed is a thirty-year Army veteran who served in a variety of command and staff positions. He earned his M.A. in national security and strategic studies from the U.S. Naval War College and his Ph.D. in history from Ohio State. He taught at West Point, where he served as chief of military history for four years. Kingseed is the author of thirty-seven articles on corporate and military leadership and such books as Eisenhower and the Suez Crisis of 1956 and Old Glory Stories: Combat Leadership in World War II. He is president of his own leadership consulting firm, The Brecourt Leadership Experience, Inc., whose clients, to name a few, include General Electric, FreddieMac, International Paper, and Bayer Corporation.

Praise for Beyond Band of Brothers

“There is a saying that 'Great leaders are born not made.' Such a man is Dick Winters... A beautifully written book about a truly great leader. This riveting read clearly reflects Dick Winters's solid character, great integrity, and unerring judgment in critical battlefield situations.”—Lieutenant General Harold G. Moore, co-author of We Were Soldiers Once...And Young

“Its modesty, its candor, and its insights into the nature of front-line leadership and the fears and behaviors of men in combat make this memoir a classic ranking with Charles MacDonald's Company Commander.”—Dennis Showalter, author of Patton and Rommel

“Winters's leadership inspired his soldiers to fight courageously under the most difficult and challenging conditions of battle. [An] extraordinary memoir.”—H.R. McMaster, author of Dereliction of Duty: Lyndon Johnson, Robert McNamara, The Joint Chiefs of Staff, and the Lies That Led to Vietnam