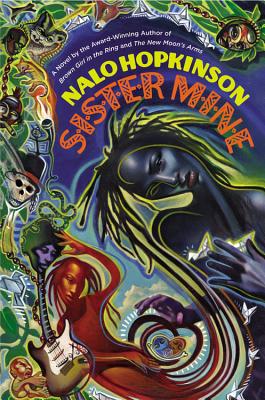 By Nalo Hopkinson
Email or call for price
Hard to Find

Nalo Hopkinson--winner of the John W. Campbell Award, the Sunburst Award, and the World Fantasy award (among others), and lauded as one of our "most inventive and brilliant writers" (New York Post)--returns with a new work. With her singular voice and characteristic sharp insight, she explores the relationship between two sisters in this richly textured and deeply moving novel . . . Sister Mine We'd had to be cut free of our mother's womb. She'd never have been able to push the two-headed sport that was me and Abby out the usual way. Abby and I were fused, you see. Conjoined twins. Abby's head, torso, and left arm protruded from my chest. But here's the real kicker; Abby had the magic, I didn't. Far as the Family was concerned, Abby was one of them, though cursed, as I was, with the tragic flaw of mortality.

Now adults, Makeda and Abby still share their childhood home. The surgery to separate the two girls gave Abby a permanent limp, but left Makeda with what feels like an even worse deformity: no mojo. The daughters of a celestial demigod and a human woman, Makeda and Abby were raised by their magical father, the god of growing things--a highly unusual childhood that made them extremely close. Ever since Abby's magical talent began to develop, though, in the form of an unearthly singing voice, the sisters have become increasingly distant.

Today, Makeda has decided it's high time to move out and make her own life among the other nonmagical, claypicken humans--after all, she's one of them. In Cheerful Rest, a run-down warehouse space, Makeda finds exactly what she's been looking for: an opportunity to live apart from Abby and begin building her own independent life. There's even a resident band, led by the charismatic (and attractive) building superintendent.

But when her father goes missing, Makeda will have to discover her own talent--and reconcile with Abby--if she's to have a hope of saving him . . .

Nalo Hopkinson was born in Jamaica and has lived in Guyana, Trinidad, and Canada. The daughter of a poet/playwright and a library technician, she has won numerous awards including the John W. Campbell Award, the World Fantasy Award, and Canada's Sunburst Award for literature of the fantastic. Her award-winning short fiction collection Skin Folk was selected for the 2002 New York Times Summer Reading List and was one of the New York Times Best Books of the Year. Hopkinson is also the author of The New Moon's Arms, The Salt Roads, Midnight Robber, and Brown Girl in the Ring. She is a professor of creative writing at the University of California, Riverside, and splits her time between California, USA, and Toronto, Canada.

"Acclaimed novelist Nalo Hopkinson is well-known for her unique postmodern mythos, often drawing on Caribbean folklore, and placing complex characters smack in the center of worlds whose magic isn't always kind and in which decisions are rarely easy. Her newest novel, Sister Mine, has a lighter edge than some of her previous work; it's an engaging, messy fable about the interconnectedness of even the little things in our lives...This is a book about family, and Sister Mine remains a suitably imperfect and vibrant story of family in all its unfathomable wonders and annoyances, and the power it holds over us - or gives us."—NPR

"She's a powerful writer with an imagination that most of us would kill for. I have read everything she has written and am in awe of her many gifts. And her protagonists are unforgettable - formidable haunted women drawn with an almost unbearable honesty - seriously, who writes sisters like Nalo? Takes courage to be that true."—Junot Diaz, in the LA Times

"Hopkinson's most wildly imaginative novel since Brown Girl in the Ring.... and some of her most accomplished prose to date; at one point, she conveys the multivalent perceptions of Makeda through stunning passages of pure synaesthesia."—Locus

"While the fantastical is ever-present, it's the personal and familial that make Sister Mine engaging and captivating. Self-doubt, interpersonal conflict and the struggle for acceptance are just as powerful as the novel's magical objects. Hopkinson's deeply saturated, poetic language is perfect to relate this story, which is deeply felt."—Globe and Mail (Toronto)

"The comingling of the fantastical and the real world in this urban fantasy is seamless and surprisingly credible . . . complex relationships and knotty family ties, all with a tasty supernatural flavor."—School Library Journal blog

"Hopkinson is extremely talented at crafting complicated protagonists, and Makeda is no exception...Her books always feel like glimpses into worlds that are fully detailed and stand on their own...Another great novel from one of the best fantasy authors working today."—io9.com

"The author of sci-fi classics The Salt Roads (2003) and Brown Girl in the Ring (1998), conjures up another hit with Sister Mine."—Essence Magazine

"As audacious as it is addictive."—A Toronto Life "Must Read"

"Hopkinson has lost none of her gift for salty, Caribbean-Canadian talk...and the relationship between Makeda and Abby always rings true: resentment and anger enduringly intertwined with love and loyalty."—Kirkus Reviews

"A most impressive work . . . vivid and richly nuanced, utterly realistic yet still somehow touched with magic."—Toronto Star on The New Moon's Arms

"With sly humor and great tenderness, Hopkinson draws out the hope residing in age and change."—Toronto Globe and Mail on The New Moon's Arms

"[A] considerable talent for character, voice, and lushly sensual writing . . . her most convincing and complex character to date."—Locus on The New Moon's Arms

"A book of wonder, courage, and magic . . . an electrifying bravura performance by one of our most important writers."—Junot Díaz, author of The Brief Wondrous Life of Oscar Wao on The Salt Roads

"Sexy, disturbing, touching, wildly comic. A tour de force from one of our most striking new voices in fiction."—Kirkus Reviews (starred review) on The Salt Roads


"Hopkinson has already captured readers with her unique combination of Caribbean folklore, sensual characters, and rhythmic prose. These stories further illustrate her broad range of subjects."—Booklist on Skin Folk

"Succeeds on a grand scale . . . Hopkinson's narrative voice has a way of getting under the skin."—New York Times Book Review on Midnight Robber

"Rich and complex . . . Hopkinson owns one of the more important and original voices in SF."—Publishers Weekly (starred review) on Midnight Robber

"Utterly original . . . the debut of a major talent. Gripping, memorable, and beautiful."—Karen Joy Fowler, author of The Jane Austen Book Club on Brown Girl in the Ring