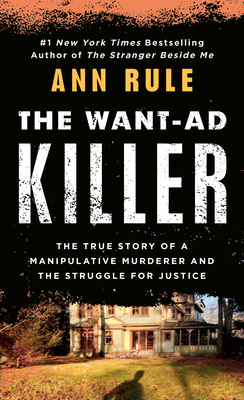 From the #1 New York Times bestselling author of The Stranger Beside Me comes a true crime story of a serial killer who was sentenced to die—yet lived to murder again....and again....

After committing his first grisly crime, Harvey Louis Carignan beat a death sentence and continued to manipulate, rape, and bludgeon women to death, using want ads to lure his young female victims. And time after time, justice was thwarted by a killer whose twisted legal genius was matched only by his sick savagery.

Complete with the testimony of the officers who put him behind bars and the women who barely escaped with their lives, The Want-Ad Killer is one of the most shattering and thought-provoking true-crime stories of our time.

Ann Rule wrote thirty-five New York Times bestsellers. Her first bestseller was The Stranger Beside Me, about her personal relationship with infamous serial killer Ted Bundy. A former Seattle police officer, she used her firsthand expertise in all her books. For more than three decades, she was a powerful advocate for victims of violent crime. She lived near Seattle and passed away in 2015.

“Rule has an instinct for suspense, knowing just what information to leak to the reader and when.”—The Washington Post Book World

“A harrowing pathological portrait, a nearly unthinkable triple-murder plot, a hold-your-breath police procedural and a tale of dedication and compassion all superbly combined to produce the most riveting true-crime account since In Cold Blood.”—Kirkus Reviews

“Excellent....One of the most detailed studies of a sociopath to dignify the true-crime circuit.”—The San Francisco Chronicle

“A good read....Rule springs surprises and revelations with a novelist’s skill.”—Seattle Times