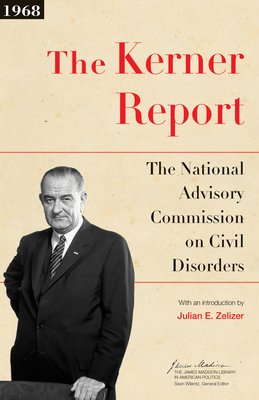 A landmark study of racism, inequality, and police violence that continues to hold important lessons today

The Kerner Report is a powerful window into the roots of racism and inequality in the United States. Hailed by Martin Luther King Jr. as a physician's warning of approaching death, with a prescription for life, this historic study was produced by a presidential commission established by Lyndon Johnson, chaired by former Illinois governor Otto Kerner, and provides a riveting account of the riots that shook 1960s America. The commission pointed to the polarization of American society, white racism, economic inopportunity, and other factors, arguing that only a compassionate, massive, and sustained effort could reverse the troubling reality of a racially divided, separate, and unequal society. Conservatives criticized the report as a justification of lawless violence while leftist radicals complained that Kerner didn't go far enough. But for most Americans, this report was an eye-opening account of what was wrong in race relations. Drawing together decades of scholarship showing the widespread and ingrained nature of racism, The Kerner Report provided an important set of arguments about what the nation needs to do to achieve racial justice, one that is familiar in today's climate. Presented here with an introduction by historian Julian Zelizer, The Kerner Report deserves renewed attention in America's continuing struggle to achieve true parity in race relations, income, employment, education, and other critical areas.