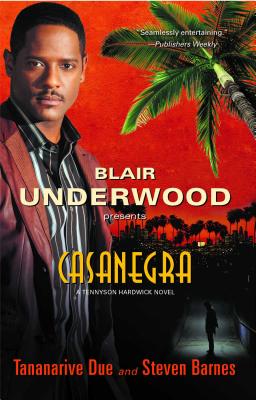 By Blair Underwood, Steven Barnes (With), Tananarive Due (With)
$20.99

This is book number 1 in the Tennyson Hardwick Series series.

An unputdownable and sizzling mystery in the heart of Hollywood, perfect for fans of Devil in a Blue Dress and Miami Vice.

Casanegra follows the adventures of Tennyson Hardwick, a gorgeous, sexy actor and former gigolo, living on the fringes of the good life in Hollywood. This story, which chronicles the redemption of a prodigal son, combines the glamour of Hollywood with the seedy hopelessness of the inner city.

In this hot and steamy mystery, Tennyson struggles to hang on to his acting career and redeem his sex-for-pay history, which estranged him from his family—especially his father, a decorated LAPD captain who raised Tennyson to call him “sir.” Now, in the wake of his father’s sudden stroke, Tennyson has to save himself from taking the fall for the first murder of a female rapper. In the process, he discovers his hidden talents—the hard way.

Two-time Golden Globe nominee and Emmy, Grammy, and seven-time NAACP Image Award recipient Blair Underwood has distinguished himself as an award-winning actor, director, and producer. He has starred in Sex in the City, Self Made: Inspired by the Life of Madam C.J. Walker, and Disney Channel’s The Lion Guard. He lives in Los Angeles, California. Follow him on Twitter at @BlairUnderwood.

Steven Barnes is an award-winning author of twenty-three novels, including the New York Times bestseller The Cestus Deception. Visit his website at LifeWrite.com.

Tananarive Due is an American Book Award-winning, Essence bestselling author of sixteen books, including the Blood Colony, The Living Blood, The Good House, Joplin’s Ghost, and Devil’s Wake. She was also a contributor to Jonathan Maberry’s middle grade anthology, Don’t Turn Out the Lights. She has won an American Book Award, an NAACP Image Award, and a British Fantasy Award. She teaches Black Horror and Afrofuturism at UCLA. She lives in Atlanta, Georgia. Visit her website TananariveDue.com.

"Casanegra is a wild ride through Hollywood, heart-pounding in every way. Smooth, ultra-sexy Tennyson Hardwick is a man readers will want to meet up close. He is all heart and danger, a knight in battered armor. You will love this novel!"
-- E. Lynn Harris New York Times bestselling author of I Say a Little Prayer