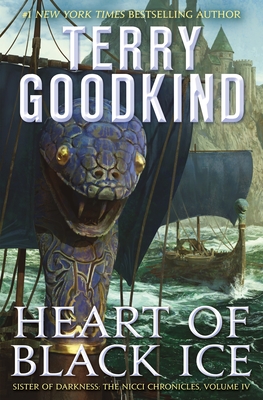 This is book number 4 in the The Nicci Chronicles series.

In the wake of the brutal war that swept the Old World in Siege of Stone, a new danger is forming along the coast. Taken captive by their enemies, King Grieve, along with Lila and Bannon are about to discover the terrifying force that threatens to bring destruction to the Old World.

The Norukai, barbarian raiders and slavers, have been gathering an immense fleet among the inhospitably rocky islands that make up their home. With numbers greater than anyone could have imagined, the Norukai are poised to launch their final and most deadly war.

Terry Goodkind (1948-2020) is a #1 New York Times bestselling author. His books include the multi-volume epic fantasy Sword of Truth series -- beginning with Wizard’s First Rule, the basis for the television show Legend of the Seeker -- and related series Richard and Kahlan and The Nicci Chronicles.

Goodkind was born and raised in Omaha, Nebraska, where he also attended art school. Alongside a career in wildlife art, he was also a cabinetmaker and a violin maker, and did restoration work on rare and exotic artifacts from around the world. In the 1990s he relocated to Nevada, where, when not writing novels, he was a racing-car enthusiast.

"Goodkind’s worldbuilding abilities are outdone only by his striking character development, resulting in an adventure that is remarkably impactful." —RT Book Reviews, Top Pick, on Death's Mistress