Call of Duty: My Life Before, During, and After the Band of Brothers (Compact Disc) 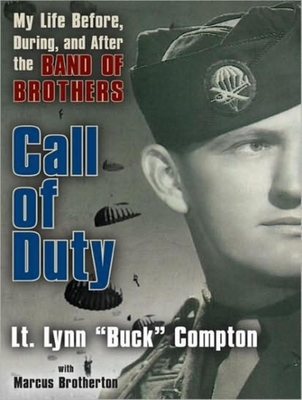 As part of the elite 101st Airborne paratroopers, Lt. Lynn "Buck" Compton fought in the critical battles of Normandy and Market Garden and in the freezing cold of Bastogne. Easy Company, immortalized as the Band of Brothers, stands today as an unparalleled icon of brotherhood and bravery under fire. Here, Compton tells his own story for the first time, revealing how the skills, work ethic, and discipline he learned as a young man served as the foundation for the courage and selflessness he displayed during the deadliest conflict of the twentieth century. From his years as a two-sport UCLA star who played baseball with Jackie Robinson and football in the 1943 Rose Bowl, through his legendary post World War II legal career as a prosecutor, in which he helped convict Sirhan Sirhan for the murder of Robert F. Kennedy, Compton truly embodies the American dream: college sports star, esteemed combat veteran, detective, attorney, and judge. This is the true story of a real-life hero who traveled to a faraway place and put his life on the line for the cause of freedom-and an insightful memoir about courage, leadership, camaraderie, compassion, and the opportunities for success that can only happen in America.

Marcus Brotherton, a former newspaper reporter and a professional writer, is the author or coauthor of seventeen books. Lt. Lynn "Buck" Compton has been a collegiate sports star, esteemed war veteran, detective, attorney, and judge. As a second lieutenant during World War II, Compton commanded the second platoon of Easy Company in the 506th Parachute Infantry Regiment, part of the 101st Airborne Division.

Reader of over four hundred audiobooks, Dick Hill has won three coveted Audie Awards and been nominated numerous times. He is also the recipient of several "AudioFile" Earphones Awards. "AudioFile" includes Dick on their prestigious list of Golden Voices.