Sent by the Iron Sky: The Legacy of an American Parachute Battalion in World War II (Hardcover) 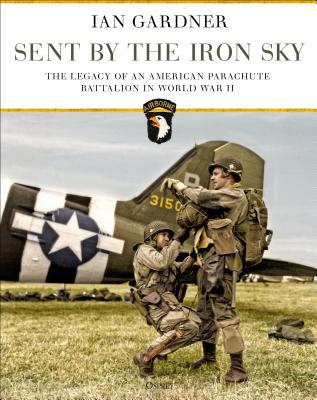 This gripping, fully illustrated title follows the story of the men of 3rd Battalion, 506th Parachute Infantry Regiment, the comrades of the "Band of Brothers," from their formation to their involvement in the D-Day landings, their part in the bitter fighting to hold Bastogne during the Battle of the Bulge, and finally their occupation of Berchtesgaden, Hitler's mountain retreat.

Following on from the success of Ian Gardner's critically acclaimed trilogy on the exploits of the 3rd Battalion, 506th Parachute Infantry Regiment, 101st Airborne Division in World War II, Sent by the Iron Sky tells their exhilarating story for a new readership. From the moment they entered the war in June, 1944, the men of 3rd Battalion were faced with brutal fighting against horrendous odds. Later in the year, nearly five months in combat with no relief led to heavy losses which reduced them to the size of a company. Their heroic defense of Bastogne saw their division awarded a Unit Citation, a first in the history of the US armed forces, and they subsequently fought on across Europe, finishing the war occupying Hitler's mountain retreat of Berchtesgaden.

Drawing on years of research and interviews with veterans of some of the toughest battles of World War II, together with full-color maps and over 200 images, Ian Gardner brings to life some of the most bitter fighting of the war in Europe, laying bare the horrors of war, the deprivations of day-to-day living, and the chaos of the front line. Additional material includes a chapter on the fate of the men captured in Normandy and a foreword by Lee Wolverton, the grandson of the commander of 3rd Battalion, Col Robert Wolverton.

Ian Gardner served for five years in Support Company, 10th Battalion, The Parachute Regiment as a medic before leaving the Territorial Army in 1993 due to injury. Always enthusiastic about military history, several years after leaving 10 Para Ian became interested in World War II US Paratroopers. After a visit to Normandy in 2000 he decided to focus on the 101st Airborne Division, and in particular the 3rd Battalion of the 506th Parachute Infantry Regiment, which led to the critically acclaimed trilogy Tonight We Die As Men, Deliver Us From Darkness and No Victory in Valhalla. He is also the author of Airborne: The Combat Biography of Ed Shames of Easy Company. Currently self-employed, he is married with two grown-up children and lives near Aldershot in Hampshire.

"Drawing on years of research and interviews with veterans of some of the toughest battles of World War II, the author brings to life the legacy of an American parachute battalion in World War II. If you are looking for a great read, or a gift for the military buff in your life, or simply want this powerful publication in your reference library, Sent by the Iron Sky is a must-have book." - Flight Journal

"Sent by the Iron Sky is an engrossing story of men at war and, particularly, of an airborne unit heretofore not well known, except, perhaps, by those with a personal connection. Gardner has done a noteworthy job in telling the tale of a fine battalion and its soldiers—true representatives of the “the greatest generation." " - Army Magazine