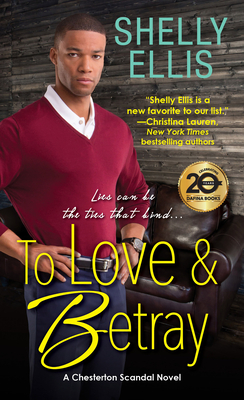 This is book number 4 in the A Chesterton Scandal Novel series.

For the wealthy Murdochs of Chesterton, Virginia, managing scandalous damage and killer drama is now their only chance at survival . . .

The bad news just won’t stop for Evan Murdoch. As he battles an attempted murder charge, he’s on the verge of getting forced out of the family corporation—and fears he can't trust his new wife, Leila. Evan finds himself leaning on his younger brother, Terrence, who might be the answer to his prayers—or lead to disaster like they’ve never seen.

With Evan’s future in limbo, Terrence struggles to keep Murdoch Conglomerated from catastrophe by becoming the new public face for the company. But a secret he tries to hide from his fiancée could send his best intentions—and last chance at love—down in flames.

Fiery Murdoch sister, Paulette, will do anything to protect her infant son—and her secrets. But her worst nightmare is about to come true. And with their vengeful half-brother, Dante Turner, closing in on the family he despises, the Marvelous Murdochs could pay a price that could finish them once and for all . . .

“This fantastic novel is replete with scandal, entitlement, treachery and passion up to the surprising end.”
—RT Book Reviews

“Drama, hot sex, and betrayals are all wrapped up in this addictive yet well-written story.”
—AAMBC Book Club

Shelly Ellis is an award-winning journalist who earned her journalism degree at the University of Maryland, College Park. Her novel, Another Woman’s Man, was nominated for a 2014 NAACP Image Award. The romance and women’s fiction author is also a film buff and amateur painter. She lives in Upper Marlboro, Maryland, not far from Washington, D.C., with her husband. Visit her online at www.shellyellisbooks.com.