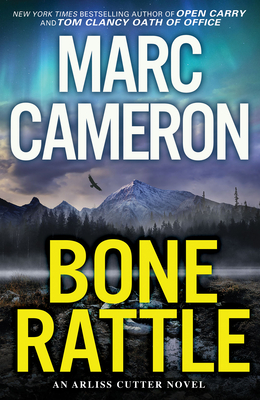 This is book number 3 in the An Arliss Cutter Novel series.

A thrilling new crime novel from the author of Tom Clancy: Shadow of the Dragon, perfect for fans of the electrifying novels of Lee Child, Jeffery Deaver, and C.J. Box.

In the icy heart of Alaska, a series of gruesome murders leads Deputy US Marshal Arliss Cutter into a firestorm of searing corruption, clashing cultures, and bone-chilling fear…

In Juneau, a young Native archeologist is sent to protect the ancient burial sites uncovered by an Alaskan gold mining company. He never returns.

In Anchorage, a female torso—minus head, hands, and feet—is washed ashore near a jogging trail by the airport. It is not the first.

At Alaska’s Fugitive Task Force, Arliss Cutter and deputy Lola Teariki are pulled from their duties and sent to a federal court in Juneau. Instead of tracking dangerous fugitives, Cutter and Lola will be keeping track of sequestered jurors in a high-profile trial. The case involves a massive drug conspiracy with ties to a mining company, a lobbyist, and two state senators. When a prosecuting attorney is murdered—and a reporter viciously attacked—Cutter realizes they’re dealing with something much bigger, and darker, than a simple drug trial. The truth lies deep within the ancient sites and precious mines of this isolated land—and inside the cold hearts of those would kill to hide its secrets…

“Suspenseful . . . Readers can only hope they won’t have long to wait for Cutter’s third outing.” —Publishers Weekly on Stone Cross

“A double-barreled blast of action, narrative, and impossible-to-fake authenticity with a great sense of place and a terrific protagonist.” —C.J. Box, #1 New York Times bestselling author on Open Carry

Included in this edition is Marc Cameron’s acclaimed Jericho Quinn novella, Triple Frontier—available here for the first time in print.

A native of Texas, Marc Cameron has spent over twenty-nine years in law enforcement. His assignments have taken him from rural Alaska to Manhattan, from Canada to Mexico and points in between. A second degree black belt in jujitsu, he often teaches defensive tactics to other law enforcement agencies and civilian groups. Cameron presently lives in Alaska with his wife and his BMW motorcycle.

“A deputy U.S. marshal stationed in Alaska is challenged by a handful of serious cases and a complicated home life…[An] energetic potboiler.”
—Kirkus Reviews

Praise for Marc Cameron and His Arliss Cutter Novels

“Suspenseful . . . builds to a satisfying, if violent, conclusion . . . Readers can only hope they won’t have long to wait for Cutter’s third outing.”
—Publishers Weekly

“A  spectacular crime story here . . . well worth hunting for it.”
—Booklist

“A double-barreled blast of action, narrative, and impossible-to-fake authenticity with a great sense of place and a terrific protagonist.  I’m looking forward to many more Arliss Cutter thrillers.”
—C.J. Box, #1 New York Times bestselling author of The Disappeared

“Cameron keeps all these plot points delicately balanced and at the same time creates sympathetic heroes, depraved villains, and nail-biting action. Readers will eagerly await his next.”
—Publishers Weekly,STARRED REVIEW

“A  terrific new series . . . Open Carry reads like a cross between Lee Child’s The Killing Floor and C.J. Box’s Blood Trail . . . and is perfect for fans of both. Cameron, a natural storyteller, brings the Alaskan wilderness to life.”
—The Real Book Spy

“Marc Cameron is a crackerjack writer who knows how to evoke character, place, and action . . . he ranks among the best. Marc Cameron’s new book is terrific.”
—New York Journal of Books