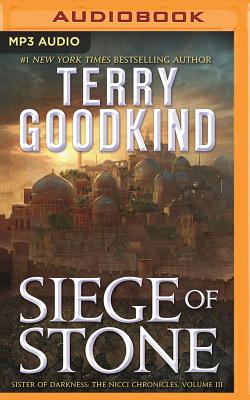 By Terry Goodkind, Christina Traister (Read by)
Email or call for price
Hard to Find

This is book number 3 in the Nicci Chronicles series.

Set in the world of the Sword of Truth saga, the ramifications of New York Times bestseller Terry Goodkind's Shroud of Eternity extend throughout all of the Old World as familiar allies, dangerous magic, and creatures created by twisted sorcery all work at cross purposes to either save or destroy Ildakar in Siege of Stone

The Sorceress Nicci, the Wizard Nathan Rahl, and the young swordsman Bannon remain in the legendary city of Ildakar after a great internal revolt has freed the slaves and brought down the powerful wizards council. But as he fled the city, capricious Wizard Commander Maxim dissolved the petrification spell that had turned to stone the invading army of General Utros fifteen centuries earlier. Now, hundreds of thousands of half-stone soldiers from the ancient past have awakened, led by one of the greatest enemy commanders in history.

Nicci, Nathan, and Bannon have to help Ildakar survive this unbreakable siege, using all the magical defenses of the legendary city. Even as General Utros holds Ildakar hostage and also unleashes his incredible army on the unsuspecting Old World, an equally powerful threat arises out in the sea.

Nicci knows the battle won't remain in the city; if she can't stop this threat, two invincible armies can sweep across the Old World and destroy D'Hara itself.