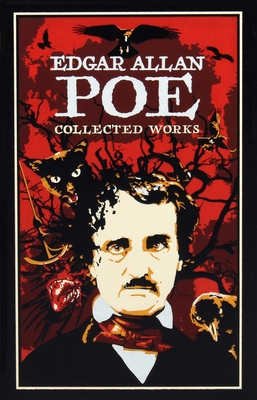 No library's complete without the classics! This new, enhanced leather-bound edition collects some of the most influential stories and poems of Edgar Allan Poe.

Edgar Allan Poe was a master of tales of the mysterious and macabre. From the eerie incantations of “The Raven” to the persistent fright of “The Tell-Tale Heart,” his stories and poems are unforgettable explorations of the darker side of life that still offer lessons and insight into human behavior today. This Canterbury Classics edition of Edgar Allan Poe collects some of his best-known work—from “Annabel Lee” to “The Fall of the House of Usher,” “Lenore” to “The Pit and the Pendulum,” and many more. With an impressive leather cover, specially designed endpapers, and an essay by a Poe scholar, Edgar Allan Poe is the perfect introduction for new readers and the perfect resource for devoted fans.Poe's writings were truly original—and this unique book is the perfect look at his uncommon genius.

A. J. Odasso’s poetry has appeared in a variety of publications, including Sybil’s Garage, Mythic Delirium, Midnight Echo, Not One of Us, Dreams & Nightmares, Goblin Fruit, Strange Horizons, Stone Telling, Farrago’s Wainscot, Liminality, Battersea Review, Barking Sycamores, and New England Review of Books. A.J.’s debut collection, Lost Books (Flipped Eye Publishing), was nominated for the 2010 London New Poetry Award and was also a finalist for the 2010–11 People’s Book Prize. Her second collection with Flipped Eye, The Dishonesty of Dreams, was released in 2014; her third collection, Things Being What They Are, was shortlisted for the 2017 Sexton Prize. She holds an MFA in creative writing from Boston University, and works in the Honors College at the University of New Mexico. A.J. has served in the Poetry Department at Strange Horizons since 2012. She lives in Albuquerque, New Mexico.