Early Islam: A Critical Reconstruction Based on Contemporary Sources (Hardcover) 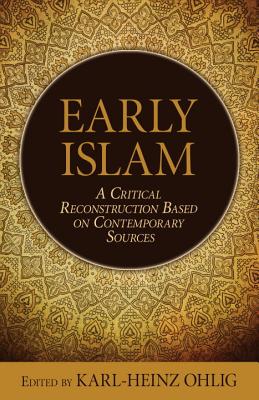 This successor volume to The Hidden Origins of Islam (edited by Karl-Heinz Ohlig and Gerd-R. Puin) continues the pioneering research begun in the first volume into the earliest development of Islam. Using coins, commemorative building inscriptions, and a rigorous linguistic analysis of the Koran along with Persian and Christian literature from the seventh and eighth centuries--when Islam was in its formative stages--five expert contributors attempt a reconstruction of this critical time period.

Despite the scholarly nature of their work, the implications of their discoveries are startling:


• Islam originally emerged as a sect of Christianity.
• Its central theological tenets were influenced by a pre-Nicean, Syrian Christianity.
• Aramaic, the common language throughout the Near East for many centuries and the language of Syrian Christianity, significantly influenced the Arabic script and vocabulary used in the Koran.
• Finally, it was not until the end of the eighth and ninth centuries that Islam formed as a separate religion, and the Koran underwent a period of historical development of at least 200 years.

Controversial and highly intriguing, this critical historical analysis reveals the beginning of Islam in a completely new light.

Karl-Heinz Ohlig (Saarbrücken, Germany) is professor emeritus of Religious Studies and the History of Christianity at the University of the Saarland, chairman of the Inarah Institute for Research into the Early History of Islam and the Koran, and the author of many books including Weltreligion Islam: Eine Einführung (Islam as World Religion: An Introduction). He is the editor (with Gerd-R. Puin) of The Hidden Origins of Islam. For more information, visit www.Inarah.de.

"Despite its scholarly presentation...the explosive nature of its contents is unmistakable: the term 'Muhammad' originally referred to Jesus; early Islam was a variant of Christianity; the 'Ur-Koran' was a Christian book in the Syro-Aramaic language."
--Die Presse (Vienna, Austria)