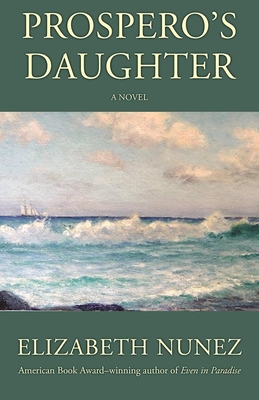 The very title of Elizabeth Nunez's gripping and richly imagined sixth novel, Prospero's Daughter, distances her work from both the original Tempest (in which the daughter, Miranda, is perhaps the least developed of all Shakespearean heroines) and from the many postcolonial reactions to the play...Nunez, who is a master at pacing and plotting, explores the motivations behind Caliban's outburst, hatching an entirely new story that is inspired by Shakespeare, but not beholden to him.
--New York Times Book Review

A story about the transformative power of love...Readers are sure to enjoy the journey.
--Black Issues Book Review

Prospero's Daughter is a captivating recreation of Shakespeare's The Tempest set on a verdant Caribbean island during the height of tensions between the native population and British colonists. Using Shakespeare's play as a template to address questions of race, class, and power, Nunez turns an intimate eye to an unlikely bond formed between a boy and a girl of disparate backgrounds.

When Peter Gardner's ruthless medical genius leads him to experiment on his unwitting patients--often at the expense of their lives--he flees England, seeking an environ where his experiments might continue without scrutiny. He arrives with his three-year-old-daughter, Virginia, in Chacachacare, an isolated island off the coast of Trinidad, in the early 1960s.

Gardner considers the locals to be nothing more than savages. He assumes ownership of the home of a servant boy named Carlos, seeing in him a suitable subject upon whom to continue his amoral medical work. Nonetheless, he educates the boy alongside Virginia. As Virginia and Carlos grow and come of age together, they form a covert relationship that violates the outdated mores of colonial rule.

When Gardner unveils the pair's relationship and accuses Carlos of a monstrous act, the investigation into the truth is left up to a curt, stonehearted British inspector, whose inquiries bring to light a horrendous secret. At turns epic and intimate, Prospero's Daughter is one of the finest novels of the past two decades.

Elizabeth Nunez is the award-winning author of a memoir and nine novels, four of them selected as New York Times Editors' Choice. Her two most recent books are Not for Everyday Use, a memoir, which won the 2015 prestigious Hurston Wright Legacy Award for nonfiction, and the novel Even in Paradise, a contemporary version of Shakespeare's King Lear. Her other novels are: Boundaries (nominated for the 2012 NAACP Image Award for Outstanding Literary Fiction); Anna In-Between (PEN Oakland Award for Literary Excellence and long-listed for an IMPAC Dublin International Literary Award); Prospero's Daughter (2010 Trinidad and Tobago One Book, One Community selection, and the 2006 Florida Center for the Literary Arts One Book, One Community); Bruised Hibiscus (American Book Award); Beyond the Limbo Silence (Independent Publishers Book Award); Grace; Discretion; and When Rocks Dance. Nunez received her PhD from New York University and is a Distinguished Professor at Hunter College, CUNY, where she teaches courses on Caribbean Women Writers and Creative Writing.