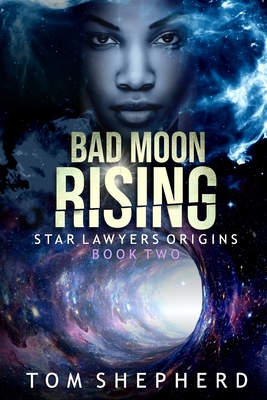 MURDER AT THE EDGE OF THE STARS 21st century murder-mystery with light undertones of science-fiction.Bad Moon Rising drops readers into the early life of a scientific giant. Before a mature Tanella Jennings would become a Nobel Laureate for her work on Faster Than Light travel, an adolescent Tanella Blake and friend, Sally Ann Palmer, are stranded on Barrier Island off the Georgia coast in the path of a massive hurricane. When the killings begin and police arrest Tanella's father for murder, the young prodigy decides to solve the crime before the storm passes and the real killer gets away. Bad Moon Rising sparkles with close encounters. Cold blooded killers, drug smugglers, underwater escapes, and a storm surge that threatens to wash away everyone trapped on Barrier Island.And if Tanella drowns in the storm, humanity will never know a gateway to the stars has closed with her passing.