Tonight We Die As Men: The untold story of Third Battalion 506 Parachute Infantry Regiment from Toccoa to D-Day (Hardcover) 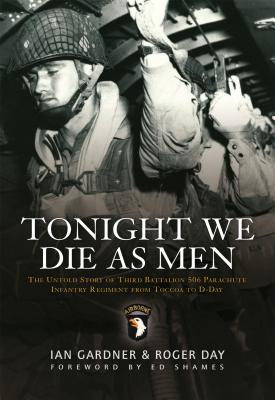 The exploits of the 3rd Battalion, 506th Parachute Infantry Regiment (PIR) have been long overshadowed by those of Easy Company, 2nd Battalion, who were immortalized in Stephen Ambrose's book Band of Brothers. Yet the actions of the 3rd Battalion were every bit as incredible and this book finally gives them deserved attention. Formed in 1942, the 506th PIR were shortly after attached to the 101st Airborne Division. After training they were transported to Wiltshire in 1943 to prepare for the invasion of Europe. Whilst taking part in the D-Day landings, the battalion suffered many immediate casualties, including the battalion commander. This is the astounding story of how the surviving paratroopers fought on towards their objectives against horrendous odds, told in their own words, and those of the French civilians who witnessed the Normandy campaign. Through many hours of interviews, and in-depth research, the authors have pieced together the perspectives of the soldiers to create a unique, comprehensive account. Including a foreword by Ed Shames, veteran of the 3rd Battalion, and illustrated with black and white photographs and maps throughout, this book vividly details the experiences of the 3rd battalion from training through to D-Day and beyond.

Ian Gardner served for five years in Support Company,10th Battalion, The Parachute Regiment as a medic, before leaving the Territorial Army in 1993 due to a parachuting injury. Ian has always loved military history but it was several years after leaving 10 Para that his interest in WWII US Paratroopers really began. Inspired after a visit to Normandy in 2000 he decided to focus on the 101st Airborne Division and in particular the 3rd Battalion of the 506th Parachute Infantry Regiment. Currently a self-employed graphic designer, this book is his first historical work co-written with Roger Day. He is married, has two teenage children and lives near Aldershot in Hampshire, UK.Roger Day's family have lived in and around the village of Ramsbury for generations. Roger spent his childhood and early adult years living in the village and during that time became very interested in the wartime history of Ramsbury and the surrounding area. His interest in local wartime history resulted in the publication, during 1999, of his first book entitled Ramsbury at War . In addition to co-authoring Tonight We Die As Men with Ian Gardner, Roger is currently working on a history of the Second World War ammunition depot that was located in Savernake Forest, Wiltshire, UK. The author lives in Hampshire and Wiltshire, UK.

Featured in World War II Magazine and The Daily Mail.

"British authors Ian Gardner and Roger Day have set out to tell the story of the 3rd Battalion of the famed 101st Airborne Division's 506th Parachute Infantry Regiment. The objective of the battalion was to capture and secure two wooden bridges built by the Germans over the Douve River east of Carentan, as access to what became known as Utah Beach. Despite the successful achievement of this important objective by the 3rd Battalion, accomplished with heavy losses, the authors found that little had been written about the battalion. In fact, they call the 3rd a "forgotten battalion," as opposed to the 2nd Battalion of "Band of Brothers" fame." -James C Roberts, The Washington Times (June 2009)

"The men of the Third Battalion fought the same tough war in Europe as their far famous Band of Brothers comrades of the E Company of the Second Battalion, but their stories were largely untold until Tonight We Die as Men. This is very much unjustified. HBO may never pick up this book as the basis for the next WW2 mini-series, but I recommend any WW2 history enthusiast, particularly those interested in airborne troops or the Normandy invasion, to check out this book. The new material presented in this book is refreshing considering many other works on Normandy are largely regurgitate existing research, while the descriptive narrative makes it, however cliché, a page turner." -Peter Chen, ww2db.com (April 2009)

"The two British authors take the reader back to Toccoa, Georgia, and the initial training received (some would say endured) by the men of the 506th PIR, commanded by Col. Robert F. Sink, then on to airborne training at Fort Benning and Camp Mackall. They also flesh out the personalities mentioned in the book so that by the time the regiment is in England and preparing for its baptism of fire in Normandy, the reader has developed a fondness for each trooper... It will be hard to find a better book about a single airborne battalion in World War II." -Mason Webb, World War II History

"Any military library strong in World War II history will find that Tonight We Die As Men fills in many gaps in literature, offering a narrowed focus on the 506th Parachute Infantry's actions and the four companies of the 3rd Battalion whose efforts were beyond the call of duty. Journal entries supplement the historical overview in this historical survey." -California Bookwatch

"Together, Gardner and Day have reconstructed the battalion's experiences, from training in Toccoa, Georgia, until the end of the Normandy campaign.  The book is based on legions of interviews with veterans, new photographic evidence from the Air Photo Archive at Keele University, many battlefield visits, and a meticulous accounting of the battalion's key actions in Normandy." - John C. McManus, Military History Quarterly