Blues in the Dark: A Thriller (Hardcover) 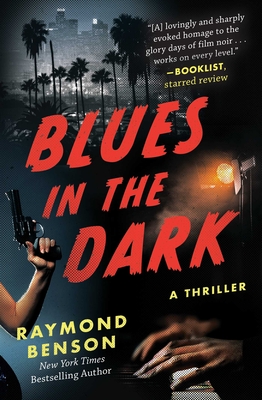 From the New York Times bestselling and internationally acclaimed author comes a Hollywood crime drama set in the 1940s and present day that tackles racism, sexism, and murder.

Karissa Glover is a movie producer who moves into a decrepit but functional old mansion in the West Adams Heights area of Los Angeles, where black celebrities of yesteryear—Hattie McDaniel, Louise Beavers, and others—once resided. The former owner was a white actress, Blair Kendrick, who often starred as the "bad girl"—a femme fatale—in films noirof the 1940s. However, Blair’s career was cut short when she was tragically killed by the mob after allegedly witnessing the slaying of a corrupt studio head in 1949.

As Karissa and her producing partner decide to develop a modern film noir about Blair Kendrick, malevolent forces from the past attempt to stop them—first with intimidation, and then with the thread of murder.

Is this because Karissa has learned that Blair was involved in a then-taboo interracial relationship with jazz musician Hank Marley? What really happened on the night that death struck in a dimly lit studio mogul’s office? The consequences of Blair and Hank’s doomed love affair still resonate in the present day as Karissa attempts to unravel Blair’s secrets.

Seeping with mystery, intrigue, Hollywood history, and forbidden romance, Blues in the Dark is Raymond Benson at his most insightful and page-turning best.

Raymond Benson is most well-known for being the third—and first American—author to be commissioned by the James Bond literary estate to write the 007 novels between 1996–2002. He is the author of thirty-six books, including the New York Times bestselling The Black Stiletto series, now in development as a feature film, and most recently The Secrets on Chicory Lane. Benson lives in Chicago, Illinois.

"This lovingly and sharply evoked homage to the glory days of film noir works on every level: as a gripping thriller, as an insightful look at racism in Hollywood, and as a perfect entree into the ever-fascinating world of moviemaking." —Booklist, starred review

“Blues in the Dark is a compelling crime novel. . . . Benson has crafted a noir film inside the pages of a book and the cast of characters in the present and past come vividly to life. He also makes the reader question what is morally just in the midst of a well-written crime drama.”—Associated Press

"Riveting from start to finish, Raymond Benson’s Blues in the Dark digs into Hollywood’s seedy underbelly of racism and misogyny. With a master storyteller’s deftness, Benson tells a classic noir tale with a contemporary twist, while still giving us a human story of forbidden love and its murderous consequences. It’s rare to find a male author who writes so convincingly from a woman’s perspective." —Gail Lukasik, author of White Like Her: My Family’s Story of Race and Racial Passing

"Raymond Benson, one of my favorite writers, has outdone himself with Blues in the Dark.  Do not miss it!"
—Max Allan Collins, author of Road to Perdition

“Raymond Benson’s Blues in the Dark is classic film noir on the page. Two lovers in a 1940s Hollywood inflicted with the disease of racism hope one day a societal cure will be found, but to no avail, as the studio considers the only option available—murder! Benson’s thrilling story told in alternating timelines keeps you riveted from the first to the very last page.”
—Tigre Hill, producer and director of The Shame of a City and The Barrel of a Gun

“A good mystery novel serves up a puzzle that sucks you in with great characters and solid clues to a startling but logical conclusion. Great mysteries are also steeped in atmosphere and have something to say. Blues in the Dark is a GREAT mystery novel. In this multi-era mystery, Raymond Benson manages to capture both the smoky atmosphere of 1940s Hollywood and the politicized Hollywood of today. In spinning this double-edged tale, Benson realistically tackles the issues of racism and sexism, then and now. A tour-du-force from a master of his craft, Blues in the Dark is as entertaining as anything Hollywood puts out, and will make you think, and feel, long after you read ‘The End.’”
—Austin S. Camacho, author of the Hannibal Jones mystery series

"Raymond Benson's Blues in the Dark had me from the first page. Forbidden love and a crime from the past come back to the present and keeps you intrigued. Karissa Glover is a great character searching for the truth. This one nailed it and will keep you up past your bedtime."
—Shauna Washington, author of the Stacey Deshay series in Alfred Hitchcock's Mystery Magazine

"A movie producer who moves to Los Angeles and stumbles onto a story sparks northwest suburban writer Raymond Benson’s look at a turbulent Hollywood of the 1940s with ramifications in the present. Benson outlines a world in which women who wanted to become stars were expected to sleep with producers and studio executives."
—Chicago Sun-Times, Shea Serrano's "5 Other New Books Not to Miss"

Praise for The Secrets on Chicory Lane

"This stand-alone is a surprising but satisfying departure for genre veteran Benson, the author of multiple James Bond pastiches as well as the acclaimed Black Stiletto series. The novel offers a compelling meditation on lifelong friendship, love, and tragedy as it details the evil that destroys two families."
—Booklist

"In a bold move away from the thrillers for which he’s best known, Raymond Benson offers readers a heartfelt and tragic tale. Across decades, the dark secrets on Chicory Lane shape and misshape the lives of all who live there. Benson, a master of suspense, has crafted a story as compelling as any thriller but with a depth of feeling few thrillers achieve. And the ending, I guarantee, will leave you breathless."
—William Kent Krueger, New York Times bestselling and Edgar award–winning author of Ordinary Grace

“A beautifully written thriller, filled with richly drawn characters, memorable dialogue, and a searing portrayal of a life-long friendship. Raymond Benson is a talented storyteller, and this is one of his best novels yet.”
—Alafair Burke, New York Times bestselling author of The Ex

"Raymond Benson pulls at the heartstrings in this tragic tale. Peppered with nostalgia, love, heartbreak, and melancholy, the narrative is profoundly entrancing and fast-paced. Part mystery, part reflective coming-of-age, The Secrets on Chicory Lane ensnares readers in its dense web, refusing to let go, even long after its jaw-dropping conclusion."
—TopShelf Magazine, five-starred review

"Where a novel lands on a bookstore shelf is defined by label: mystery, suspense, thriller, horror, literary. Raymond Benson’s The Secrets on Chicory Lane is all of those things, and a little more. . . . Benson sculpts perfect sentences and scenes, memories and emotions dripping off the pages. I found parts of myself inside it . . . snatches of my childhood, awkward bits from long years ago . . . . A damn fine book."
—Jean Rabe, USA TODAY bestselling author

"The Secrets on Chicory Lane has a premise to envy: A killer and the girl next door meet one last time before execution day. How much do we know the people we have spent our lives with? Raymond Benson explores the nature of evil and how little chance we have to recognize it when we see it, or escape it, if we do."
—Lori Rader-Day, Mary Higgins Clark Award–winning author of The Day I Died

"Pitch-perfect characters drew me in; unrelenting suspense left me breathless by the end. Raymond Benson is a master storyteller."
—Molly MacRae, award-winning author of the Haunted Yarn Shop Mysteries

"A harrowing tale of childhood physical and sexual abuse, and descent into madness . . . If dark is your thing this well-written tale of a sad, wasted life will make you count your blessings."
—Mystery Scene Magazine

"A wonderfully written and heartbreaking account . . . as good a coming-of-age novel as I have read for many a year, but Benson’s skill as a storyteller doesn’t stop there. He delivers the poignancy and unbearable sensitivity of first love and sexual awakening. His account of how children escape from the shackles slapped on by their parents is masterly. . . . There is also a very clever murder mystery, which isn’t resolved until the last few pages, and then the resolution brings only heartbreak."
—Fully Booked

"The story is just so brilliantly written that you can’t finish one chapter without reading the next three, and so on and so forth. . . . A powerful novel of childhood trauma seeping into an adult’s psychology. . . . Tremendously moving."
—Anne Bonny Book Reviews

Praise for In the Hush of the Night

“Bringing to light the often-hidden underbelly of human trafficking crimes, Benson spins a riveting, suspenseful narrative that is as much a cat-and-mouse procedural as it is an exploration of the victim’s humanity. The FBI detail is impressively realistic and the dynamic Special Agent, Annie Marino, is terrific!”
—John Douglas, former Chief of FBI’s National Center for the Analysis of Violent Crime and co-author of Mindhunter, the basis for the Netflix television series

"With can’t-stop-reading suspense, In the Hush of the Night splits open an ugly international criminal underworld that includes Russia’s vicious FSB. Rich with details, this insider thriller has far-reaching tentacles that FBI Special Agent Annie Marino pulls together through a joint operation of the FBI, ICE, local police, and sheriff organizations across six states. Turn on your reading light and settle in for an exciting ride."
—Gayle Lynds, New York Times-bestselling author of The Assassins

"Chilling and laced with menace, In the Hush of the Night deftly tackles a horrifying, timely, and too-often-overlooked crime of our day. Annie Marino is a great character, and the author's knowledge of the underworld is more than a little frightening. If you’re not reading Raymond Benson, you’re missing out.”
—Marcus Sakey, author of the bestselling Brilliance Trilogy and Afterlife

"A gritty, realistic story of human trafficking that introduces Annie Marino, an FBI agent unafraid to work the toughest cases. Benson's stellar novel In the Hush of the Night twists and turns to the explosive and satisfying ending. You'll want to hear more from Annie Marino."
—Jamie Freveletti, internationally bestselling author of Blood Run

"In the Hush of the Night sucked me in and kept me glued to the page. Raymond Benson’s book is an intense and frighteningly authentic portrayal of the harrowing experiences inflicted on human trafficking victims by the depraved men who prey upon them for profit and twisted pleasure. FBI Special Agent Annie Marino’s compassion, strength, and dedication to the pursuit of justice for these women makes her exactly the kind of realistic hero readers crave. A captivating story that will stay with you long after you reach the end."
—Diane Capri, New York Times- and USA Today-bestselling author of The Hunt for Jack Reacher series

"Raymond Benson . . . delivers a finely crafted standalone novel this time out. It provides a kick-ass heroine, a great supporting cast, and a vivid glimpse into a sordid business: the buying and selling of women to an unfortunately all-too-willing customer base. Showing admirable restraint, he emphasizes character development over gritty displays of violence, wisely leaving the more graphic elements to his readers’ respective imaginations. It’s not a cheat, however, because one of his chief strengths are his action set pieces, a prime example of which he leverages to great advantage towards the conclusion of this fast-paced, immensely pleasing offering."
—Mystery Scene magazine

"In the Hush of the Night is without a doubt a shocking thriller. It offers an insight into the seedy, sleazy and lucrative world of human trafficking and sexual slavery. How it operates and most importantly, what the police can do to save victims. Don’t read late at night, alone!"
—Anne Bonny Book Reviews, 5-star review