Bad Before Good And Those In Between (Paperback) 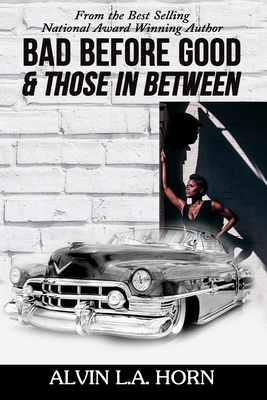 Zelda Harjo's life has been in a constant tailspin due to family she loved and lost, as well as hidden family secrets. She has injected herself into other folk's families, and that has left her with consequences which torture her soul. How do we accept doing wrong sometimes in order to make things right in life? Zelda has street fighter skills, the expertise of a hustler, and a strong work ethic. Everything that's good and bad about her can and has crossed over into her sensual fires, sometimes resulting in bad decisions. She is not above compromising in mixing the good with the bad to go with her deep sense of morality that drives her in the right directions, but sometimes the mixture is done too late. Her family ties are rooted in cryptic secret relations, leaving her feeling incomplete and struggling with how to move forward in life. A Black and Native American woman, Zelda is beautiful; but she doesn't feel feminine or attractive even though others lust after her. She does, however, use the strength of both sides of her heritage to assist her in seeing inside of people in order to help her survive. With a surprise opportunity, Zelda's future seems to be changing, but lust, thievery, and mayhem seem to be always a hop, skip, and a leap away as she faces the legacy of her bloodline, and the reality of its dysfunctionality. Family lies, deception, and secrets all come to light in Bad Before Good & Those In-Between.

Alvin Lloyd Alexander Horn has lived, breathed the Northwest air, and floated in all the nearby rivers and streams leading to the Pacific Ocean. As in the stories of Hemingway, the poetry of Langston Hughes, and the novels of Walter Mosley, their writings - as well as Alvin's - are all byproducts of their childhood environments and their subsequent travels. Alvin's experiences in the Emerald City shines through in his poetry, short stories, and novels. Growing up in the "liberal on the surface" Seattle lifestyle, Alvin's childrearing was grounded by interactions with Black people who had jobs, who could go most places they desired, and who were not residents of stereotypical ghettos. He feels that his passion for writing was triggered by his mother sending him to the library when she placed him on restriction; often for daydreaming while in school. He also credits the little gray-haired white lady - the librarian for introducing him to the likes of Richard Wright and Zora Neale Hurston. Upon reading the work of Nikki Giovanni, Alvin knew he wanted to be a writer of love stories and poetry. "Some of my erotic writing imagination came from my dad leaving Playboy magazines in a not-so-secret place. My friends were fixated on the pictures; I just read the stories...most of the time." Alvin played sports at the University of New Mexico in the mid-70s and had a short sports career after college, and as a musician; those backgrounds often shows up in his writings. Alvin has worked in the field of education teaching working with at-risk youth. Alvin is a highly acclaimed spoken word artist which allows him to travel and promote his art of words. He has balanced his writing career alongside doing voice-overs for radio and TV, music, video, and movie productions, as well as acting. His writings have appeared in many periodicals ranging in genres from fiction to erotica. He can often be found all over the Northwest reciting poetry and playing stand-up bass. Alvin loves being on the back deck of his houseboat writing. Alvin L.A. Horn is the author of: BRUSH STROKES; 2005 PERFECT CIRCLE; published by Zane and Simon and Schuster, 2012 ONE SAFE PLACE; published by Zane and Simon and Schuster, 2014 BRUSH STROKES; the re-release, with an added short Story, 2016 www.alvinhorn.com https: //www.facebook.com/alvinhorn Alvin L.A. Horn was the 2012 Billboard Best Erotic Romantic Spoken Word Artist of the year. You can hear at https: //soundcloud.com/alvinhorn.