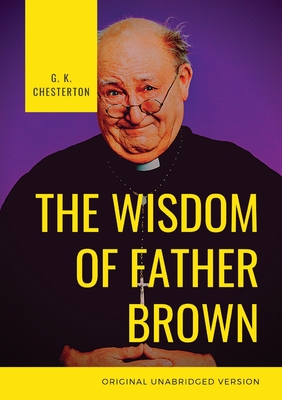 Father Brown is a fictional Roman Catholic priest and amateur detective who is featured in 53 short stories published between 1910 and 1936 written by English novelist G. K. Chesterton. 1] Father Brown solves mysteries and crimes using his intuition and keen understanding of human nature. Chesterton loosely based him on the Rt Rev. Msgr. John O'Connor (1870-1952), a parish priest in Bradford, who was involved in Chesterton's conversion to Catholicism in 1922. Chesterton portrays Father Brown as a short, stumpy Roman Catholic priest, with shapeless clothes, a large umbrella, and an uncanny insight into human evil. In "The Head of Caesar" he is "formerly priest of Cobhole in Essex, and now working in London". He makes his first appearance in the story "The Blue Cross" published in 1910 and continues to appear throughout forty-eight short stories in five volumes, with two more stories discovered and published posthumously, often assisted in his crime-solving by the reformed criminal M. Hercule Flambeau.Father Brown also appears in a third story - making a total of fifty-one - that did not appear in the five volumes published in Chesterton's lifetime, "The Donnington Affair", which has a curious history. In the October 1914 issue of an obscure magazine, The Premier, Sir Max Pemberton published the first part of the story, then invited a number of detective story writers, including Chesterton, to use their talents to solve the mystery of the murder described. Chesterton and Father Brown's solution followed in the November issue. The story was first reprinted in the Chesterton Review (Winter), 1981, pp. 1-35 in the book Thirteen Detectives.Unlike the better-known fictional detective Sherlock Holmes, Father Brown's methods tend to be intuitive rather than deductive. He explains his method in "The Secret of Father Brown" "You see, I had murdered them all myself.... I had planned out each of the crimes very carefully. I had thought out exactly how a thing like that could be done, and in what style or state of mind a man could really do it. And when I was quite sure that I felt exactly like the murderer myself, of course I knew who he was."Brown's abilities are also considerably shaped by his experience as a priest and confessor. In "The Blue Cross", when asked by Flambeau, who has been masquerading as a priest, how he knew of all sorts of criminal "horrors," Father Brown responds: "Has it never struck you that a man who does next to nothing but hear men's real sins is not likely to be wholly unaware of human evil?" He also states how he knew Flambeau was not really a priest: "You attacked reason. It's bad theology."The stories normally contain a rational explanation of who the murderer was and how Brown worked it out. He always emphasises rationality some stories, such as "The Miracle of Moon Crescent", "The Oracle of the Dog", "The Blast of the Book" and "The Dagger with Wings", poke fun at initially sceptical characters who become convinced of a supernatural explanation for some strange occurrence, but Father Brown easily sees the perfectly ordinary, natural explanation. In fact, he seems to represent an ideal of a devout but considerably educated and "civilised" clergyman. That can be traced to the influence of Roman Catholic thought on Chesterton. Father Brown is characteristically humble and is usually rather quiet, except to say something profound. Although he tends to handle crimes with a steady, realistic approach, he believes in the supernatural as the greatest reason of all.