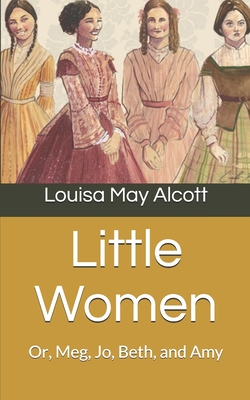 By Louisa May Alcott
Email or call for price
Special Order

Margaret, the eldest of the four, was sixteen, and very pretty, being plump and fair, with large eyes, plenty of soft, brown hair, a sweet mouth, and white hands, of which she was rather vain. Fifteen-year-old Jo was very tall, thin, and brown, and reminded one of a colt; for she never seemed to know what to do with her long limbs, which were 5very much in her way. She had a decided mouth, a comical nose, and sharp, gray eyes, which appeared to see everything, and were by turns fierce, funny, or thoughtful. Her long, thick hair was her one beauty; but it was usually bundled into a net, to be out of her way. Round shoulders had Jo, big hands and feet, a fly-away look to her clothes, and the uncomfortable appearance of a girl who was rapidly shooting up into a woman, and didn't like it. Elizabeth-or Beth, as every one called her-was a rosy, smooth-haired, bright-eyed girl of thirteen, with a shy manner, a timid voice, and a peaceful expression, which was seldom disturbed. Her father called her "Little Tranquillity," and the name suited her excellently; for she seemed to live in a happy world of her own, only venturing out to meet the few whom she trusted and loved. Amy, though the youngest, was a most important person, -in her own opinion at least. A regular snow-maiden, with blue eyes, and yellow hair, curling on her shoulders, pale and slender, and always carrying herself like a young lady mindful of her manners. What the characters of the four sisters were we will leave to be found out.