In the Mayor's Parlour (Paperback) 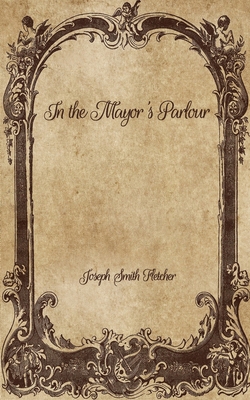 Hathelsborough market-place lies in the middle of the town-a long, somewhat narrow parallelogram, enclosed on its longer side by old gabled houses; shut in on its western end by the massive bulk of the great parish church of St. Hathelswide, Virgin and Martyr, and at its eastern by the ancient walls and high roofs of its medi val Moot Hall. The inner surface of this space is paved with cobble-stones, worn smooth by centuries of usage: it is only of late years that the conservative spirit of the old borough has so far accommodated itself to modern requirements as to provide foot-paths in front of the shops and houses. But there that same spirit has stopped; the utilitarian of to-day would sweep away, as being serious hindrances to wheeled traffic, the two picturesque fifteenth-century erections which stand in this market-place; these, High Cross and Low Cross, one at the east end, in front of the Moot Hall, the other at the west, facing the chancel of the church, remain, to the delight of the arch ologist, as instances of the fashion in which our forefathers built gathering places in the very midst of narrow thoroughfares.Under the graceful cupola and the flying buttresses of High Cross the countryfolk still expose for sale on market-days their butter and their eggs; around the base of the slender shaft called Low Cross they still offer their poultry and rabbits; on other than market-days High Cross and Low Cross alike make central, open-air clubs, for the patriarchs of the place, who there assemble in the lazy afternoons and still lazier eventides, to gossip over the latest items of local news; conscious that as they are doing so their ancestors have done for many a generation, and that old as they may be themselves, in their septuagenarian or octogenarian states, they are as infants in comparison with the age of the stones and bricks and timbers about them, grey and fragrant with the antiquity of at least three hundred years.Of all this mass of venerable material, still sound and uncrumbled, the great tall-towered church at one end of the market-place, and the square, heavily fashioned Moot Hall at the other, go farthest back, through association, into the mists of the Middle Ages. The church dates from the thirteenth century and, though it has been skilfully restored on more than one occasion, there is nothing in its cathedral-like proportions that suggests modernity; the Moot Hall, erected a hundred years later, remains precisely as when it was first fashioned, and though it, too, has passed under the hand of the restorer its renovation has only taken the shape of strengthening an already formidably strong building. Extending across nearly the whole eastern end of the market-place, and flanked on one side by an ancient dwelling-house-once the official residence of the Mayors of Hathelsborough-and on the other by a more modern but still old-world building, long used as a bank, Hathelsborough Moot Hall presents the appearance of a medi val fortress, as though its original builders had meant it to be a possible refuge for the townsfolk against masterful Baron or marauding Scot. From the market-place itself there is but one entrance to it; an arched doorway opening upon a low-roofed stone hall; in place of a door there are heavy gates of iron, with a smaller wicket-gate set in their midst; from the stone hall a stone stair leads to the various chambers above; in the outer walls the windows are high and narrow; each is filled with old painted glass. A strong, grim building, this; and when the iron gates are locked, as they are every night when the curfew bell-an ancient institution jealously kept up in Hathelsborough-rings from St. Hathelswide's tower, a man might safely wager his all to nothing that only modern artillery could effect an entrance to its dark and gloomy interior.